Collaboration is encouraged and teams may be comprised of one or more students and professionals. The teams judged to have the first, second, and third best scores will be awarded prizes of $600, $400, and $200, respectively, contingent upon:

The organizers of the competition reserve the right to both modify these rules and disqualify any team for any efforts it deems inconsistent with fair and open practices. In addition, the top entries will also be encouraged to submit a journal-quality paper to the International Journal of Prognostics and Health Management (ijPHM).

Teams may register by contacting the Competition organizers (emails above) with their name(s), affiliation, and a team alias under which the scores would be posted. Please note: In the spirit of fair competition, we allow only one account per team. Please do not register multiple times under different user names, under fictitious names, or using anonymous accounts. Competition organizers reserve the right to delete multiple entries from the same person (or team) and/or to disqualify those who are trying to “game” the system or using fictitious identities.

This year’s data challenge examines the fault behavior of an ion mill etch tool used in a wafer manufacturing process (see references at the end of this document). An ion mill etching tool is shown in Figure 1. The process of ion mill etching typically consists of the following steps: 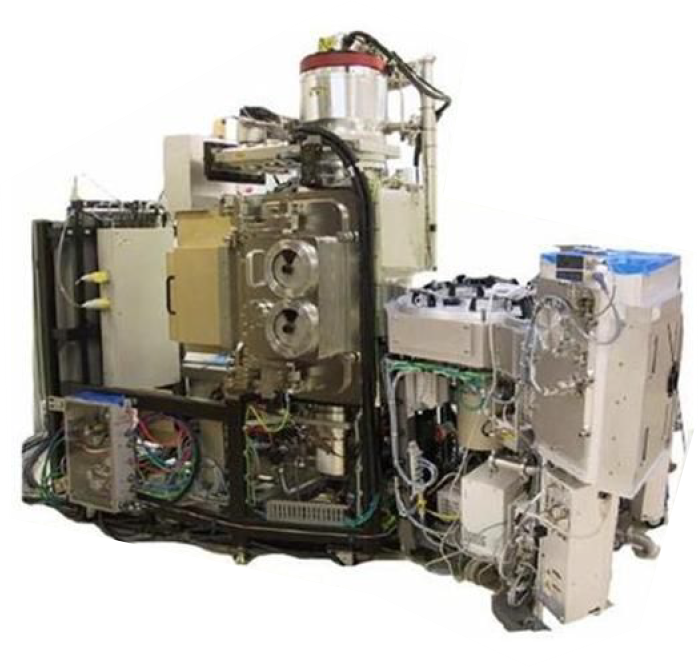 An ion source generates ions that are accelerated through an electric field using a series of grids set at specific voltages. This creates an ion beam that travels and eventually strikes the wafer surface. Material is removed from the wafer when ions hit the wafer surface. The wafer is placed on a rotating fixture that can be tilted at different angles facing the incoming ion beam. The wafer can be shielded from the ion beam until ready for milling operation to commence using a shutter mechanism as shown in Figure 2. A Particle Beam Neutralizer (PBN) control system influences the ion beam shape / ion distribution as it travels to the wafer surface.

The wafer is cooled by a helium / water system called flowcool. The cooling system passes helium gas behind the wafer at a specified flow rate. The helium gas is indirectly cooled by a water system. The wafer and fixture o-ring separates the flowcool gas from the ion mill vacuum chamber.

Many different failure mechanisms can be present in this system including leaks between flowcool and ion mill chambers, electric grid wear, ion chamber wear, etc. It would be beneficial to predict where and when these failures occur and schedule downtime of these ion mills for maintenance operations. 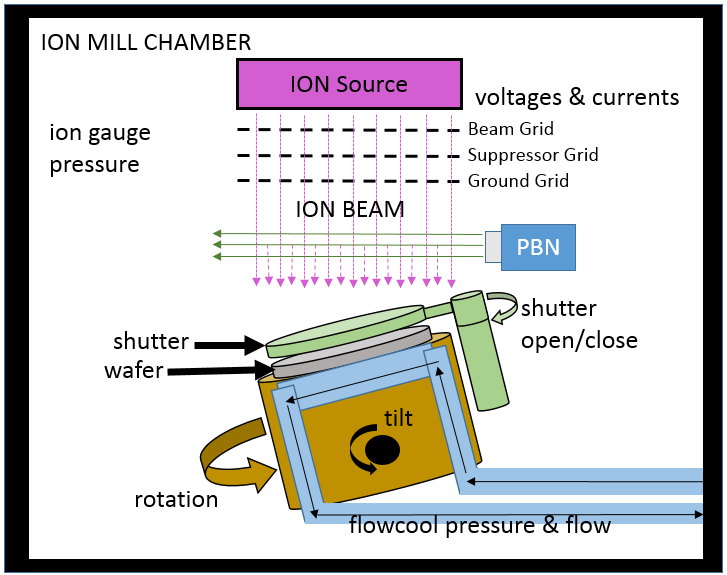 Objectives
The objective of this data challenge is to build a model from time series sensor data collected from various ion mill etching tools operating under various conditions and settings.

Predictions of time-to-failure at a specific time should only use time-series data from current and past times. In other words, do not try to predict the point of failure first and then backtrack through time to determine time-to-failure predictions.

Data Description
The data for this challenge will be available at https://drive.google.com/open?id=15Jx9Scq9FqpIGn8jbAQB_lcHSXvIoPzb. The description of the settings / sensor data can be found in the Table below. The data has been anonymized so the units are not provided.

The faults are marked in another file with corresponding time.

The time when the failure occurs is provided and is when the operator shuts down the machine for maintenance. This is what should be predicted. The actual start of the failure may occur much earlier than the provide failure time—this time is not provided.

The data is contained in a zip file. In this zip file, there are two folders, train and test. The train folder contains the training data used for modeling purposes. The test folder contains the test data that is to be used with your model to generate submissions of time-to-failure for the three different failure modes of interest: FlowCool Pressure Dropped Below Limit, Flowcool Pressure Too High Check Flowcool Pump, and Flowcool leak. The time where faults occur is found in the train/train_faults folder. Some time-to-failure examples are provided in the train/train_tff folder. There are ‘null’ values where faults do not occur in within a specified time horizon. The .csv files under the train folder represent the ‘sensor’ data that are used as predictors. Each of these files represent a separate ion milling tool.

Submissions
The scoring website (http://70.32.24.178:8080) is where submissions are to be sent for automated scoring on the test data set. Please contact nicholas.c.propes@seagate.com to create an account with the following information:

Scoring
Scoring is computed by comparing the TTF submission with a ground truth TTF. Each TTF prediction has a subscore that is computed with the following rules:

The subscores for each prediction are summed and then divided by the total number of cells for each file. The file scores then then summed. A better score is one that is lower.